We are delighted to inform you that our next NY Posthuman Spring Summit is scheduled for Saturday, April 27th, to be held at NYU, 4.00-7.00 pm. This is a truly special event! In fact, we are celebrating the 5th Anniversary of the NY Posthuman Research Group: Congratulations to all of us, this is a unique group of visionnaires and thinkers who are changing the world with their ideas, intentions and visions, thanks again to each of you! In order to celebrate, we are holding a half day conference, followed by an optional dinner. We have a line of highly committed national and international speakers on the topic of the posthuman; we will also hold a circle to share ideas and projects. This is the program:  ​ 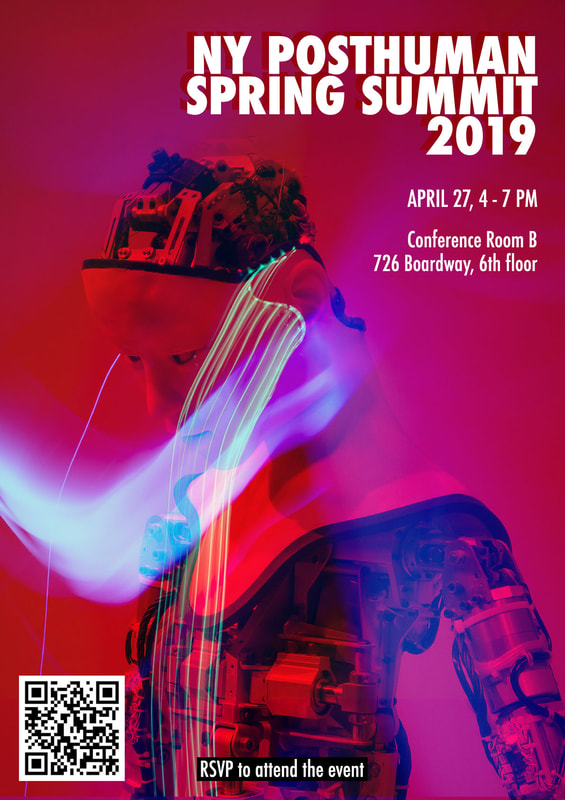 PROGRAM
Day and time: Saturday, April 27th, 4.00-7.00 pm.
(Please, note that the chronological order of the talks may change)

4:00-5:20 pm
Introduction and Greetings by the Organizers

Exhibition
"Back to the Futurist"
Danny Daniel (Museum of Interesting Things)

Full abstracts and bios of Presenters available in the last section of this web page.

Here all the details to attend our NY Posthuman Spring 2019 Summit:

If you are planning to attend, please make sure to send the form, otherwise, the security will not let you in the building.

Our most sincere gratitude goes to NYU for all the kind, generous and precious support offered to our Group.

Please, note that dinner is not covered by the Conference and is on your budget.
If you would like to join, please, fill ​this form.
​Some of the organizers will be attending.
BIOS AND ABSTRACTS
SPEAKER 1

BIO
Anya Bernstein is Associate Professor of Anthropology at Harvard University. Her second book (forthcoming with Princeton University Press in 2019), titled The Future of Immortality: Remaking Life and Death in Contemporary Russia, explores the contemporary Russian communities of visionaries and utopians who are pressing at the very limits of the human.

ABSTRACT
Through practices such as cryonics and plans to build robotic bodies for future “consciousness transfer,” the Russian transhumanist movement has engendered competing practices of immortality as well as ontological debates over the immortal body and person. Drawing on an ethnography of these practices and plans, I explore controversies around religion and secularism within the movement as well as the growing disagreements between transhumanists and the Russian Orthodox Church. I argue that the core issues in debates over the role of religion vis-à-vis immortality derive from diverse assumptions being made about “the human,” which—from prerevolutionary esoteric futurist movements through the Soviet secularist project and into the present day—has been and remains a profoundly plastic project.

BIO
Magda Romanska is an Associate Professor of Theatre Studies and Dramaturgy at Emerson College in Boston, MA, and the Executive Director and Editor-in-Chief of TheTheatreTimes.com, the largest global digital theatre portal, for which she won the 2018 Elliott Hayes Award for Outstanding Achievement in Dramaturgy. Her research focuses on theatre, transmedia, new media dramaturgy, and posthumanism. She has taught at Harvard University, Yale School of Drama, Cornell University, and Emerson College. Romanska is the author or editor of four critically acclaimed theatre books, including The Post-traumatic Theatre of Grotowski and Kantor, Reader in Comedy: An Anthology of Theory and Criticism; and The Routledge Companion to Dramaturgy, a leading handbook of dramaturgy. Her fifth book, an edited anthology, Theatermachine: Tadeusz Kantor in Context is forthcoming from NUP. She is currently completing two book projects: The Bionic Body: Technology, Disability and Posthumanism, and Transmedia Dramaturgy: Multiplatform and Networked Performance.

ABSTRACT
Posthuman Performance: Tech-Objects in Theatre and Performing Arts From Robot Actors to Algorithm - The paper focuses the use of posthuman tech-objects (robots, algorithms, holograms, AI) in live performance in theatre and performing arts, including the use of space, time, character, dramaturgical tools and mediated human-non-human presence.

BIO
Francesca Ferrando is Adjunct Assistant Professor of Philosophy at NYU-Liberal Studies, New York University, USA. A leading voice in the field of Posthuman Studies and founder of the NY Posthuman Research Group, she has been the recipient of numerous honors and recognitions, including the Sainati prize with the Acknowledgment of the President of Italy. Her book "Philosophical Posthumanism" is coming out with Bloomsbury Publisher in May 2019. In the history of TED talks, she was the first speaker to give a talk on the topic of the posthuman. US magazine "Origins" named her among the 100 people making change in the world.

ABSTRACT
The notion of ‘the human’ is in need of urgent redefinition. At a time of radical bio-technological developments, and in light of the political and environmental imperatives of our age, the term ‘posthuman’ provides an alternative. The philosophical landscape which has developed as a response to the crisis of the human, includes several movements, such as: Posthumanism, Transhumanism, Antihumanism and Object Oriented Ontology. This book explains the similarities and differences between these currents and offers a detailed examination of a number of topics that fall under the “posthuman” umbrella, including the anthropocene, artificial intelligence and the deconstruction of the human. Francesca Ferrando affords particular focus to Philosophical Posthumanism, defined as a philosophy of mediation which addresses the meaning of humanity not in separation, but in relation to technology and ecology. The posthuman shift thus emerges in the global call for social change, responsible science and multispecies coexistence.

Book endorsement by Kevin Warwick, Emeritus Professor at Coventry and Reading Universities, UK: "In this stunning book Francesca Ferrando paints a clear and inspirational picture of the future of humankind. Her book is both thorough and exciting. If you want to know what Posthumanism is all about and peek into our future world, then dive into the book and wallow in its pages."

BIO
Miguel Almiron, Ph.D. 'Aesthetics, Sciences & Technologies of Art', is a Media Artist and Assistant Professor at the University Paris-Est Marne-la-Vallée, France, Department of ‘Cinema, Music and Digital Art'. He is a member of research lab (LISAA, EA 4120) and associated with the Labex Arts-H2H/Ens Louis-Lumière research program "Deceptive Arts. Machines, Magic, Media.". He has published: Stéréoscopie et Illusion (Eds. G. Pisano & E. Jacopin, Lille, PUS, 2018). He leads a theoretical and technical practice exploring and reflecting on the possibilities of expressing the senses of body, and the human being through the use of new digital technologies.

ABSTRACT
Some contemporary arts and works discourses about posthumanity demystify fears expressed in most science fiction works. They lead us along a disturbing path between being and appearance, presence and absence, identity and ethics. Closely tied to science, works of artists like Moon Rivas, Neil Harbisson, Stelarc, Goshka Macuga, or scientist Hiroshi Ishiguro, question the future of this broadened humanity. Our article aims to analyze the intersection of art, science and technology the relation of the posthuman’s influence and the cultural consequences in the real life. As we can see for example Bina-48, sitting face to face with its human alter ego “believes” She/it exist.

BIO
Hana Worthen is Assistant Professor of Theatre and Performance Studies at Barnard College, a member of the Ph.D. in Theatre Program, and an affiliate of the Institute for Comparative Literature and Society, both at Columbia University; she serves as an Associate Director of Barnard’s Center for Translation Studies as well. Her publications include Playing Nordic: The Women of Niskavuori, Agri/Culture, and Imagining Finland on the Third Reich Stage (University of Helsinki, 2007), a co-edited anthology Finland’s Holocaust: Silences of History (Palgrave, 2013), and scholarly articles appearing in Contemporary Theatre Review, TDR: The Drama Review, Modern Drama, Theatre Journal. Her current research takes up the intersection between theatrical and philosophical post/humanism.

ABSTRACT
Moving beyond the naturalizing processes of Anglo-European “white aurality” legitimating humanist theatricality, this paper centers on the ethical implications of the posthuman theatrical soundscape. I take up a stage production, Mental Finland (directed by Kristian Smeds, Royal Flemish Theatre, Brussels, 2009), exploring how its use of sound affectively animates and dissipates the spectatorial body, making it present to itself as a sensory catalogue of acquired belonging and as a locus for the recalibration of trans-subjective relationalities. The soundscape of Mental Finland enhances a corporeal event, I argue, resounding “the human” only to exceed it, affectively transforming the body, in Deleuze and Guattari’s sense, from a territorialized to a relational performance. While humanist theatrical aurality solidifies the body as corporeal coordinates, as serviceable cultural memory, rendering tangible the auricular consolidation of the spectator as dramatic consciousness, Mental Finland deploys an alternative sonic materiality, resounding that mise-en-corps, like the mise-en-scène, as a site of contestation. In/voluntarily responsive to the dis/junctions hinging between materially irreconcilable sound registers, the spectators’ bodies move from being subject to technological unification, becoming refashioned as fields of self- and trans-relation. Considering how this sonic mediation politicizes the body as an aural extension of “history” and prompts it to disarticulate itself from that ontological condition in the here and now of performance, this paper asks how sound transforms the body from a humanist position in perspective to a posthuman alterity having perspective.

BIO
Shveni Shah pursued her Bachelors at New York University (NYU) with a degree in Sociology and a minor in Child and Adolescent Mental Health Studies. At NYU, Shveni was a recipient of the Founders Day Award and is now an educator at Ascend Now, an educational management institution. Alongside my passion for education, is that of learning about my religion: Jainism. Jainism, for me, is a way of living life, and I would like to share this through my personal lens. Specifically the principle of non-attachment, one that challenges me the most.

ABSTRACT
The five vows of Jainism include non-violence (Ahimsa), truth (Satya), non-stealing (Asteya), celibacy (Brahmacharya), and lastly, non-attachment (Aparigraha). These five pillars are the fundamentals of Jainism. The values and morals grounded by this lifestyle pave way for individuals to self-enquiry and self-realization. The principle of non-attachment is one that challenges individuals, groups, and communities conforming to societal norms in the 21st century. Non-attachment alludes to detaching from worldly possessions, relationships and feelings, which have the ability to stray us from true happiness and a pure life. As materialism grows, and technology advances, individuals are only becoming more possessive and avaricious, driving them away from utmost gratification. Its respect for, and engagement with, all forms of life, allows Jainism to become an integral component in posthuman ethics. The five principals allow for true engagement with a non-anthropocentric lifestyle, that aids in developing thorough alertness and awareness of one’s environment. The religion has been adapting to societal values for centuries, which only illustrates its ability to further integrate with posthuman society

BIO
The Museum of Interesting Things is a traveling interactive demonstration/exhibition of antiques and inventions that goes to schools, libraries and events and inspires kids and adults to be curious. We bring back tinkering. I like to say it shows kids and adults that their ipods did not pop out of thin air! Like a circus...just no elephants!

​ABSTRACT
The Museum of Interesting Things will teach you how you can actually go Back To The Future! We bring items that you may think are today or tomorrow but actually are yesterday! Those "futurist" items made us go back and then back further and through our extensive research and collection we found the future right there in the past!  We will also bring items from our Missing Link Factor exhibit, the link between disparate and not so disparate items through history that brought us the items we take for granted in our lives. Sometimes you will be surprised, sometimes entertained and all the while hopefully you will learn something not just new but future/retro new. So come back to the Futurist with us because The Museum of Interesting Things takes you back to the future that the past never saw coming.

--
This will be an amazing Summit and Celebration! We are looking forward to seeing you again and keeping developing together the posthuman turn. In the meanwhile, we wish you all a serene and vibrant week.